Blog: Tim Vlandas on the explanation behind far right success 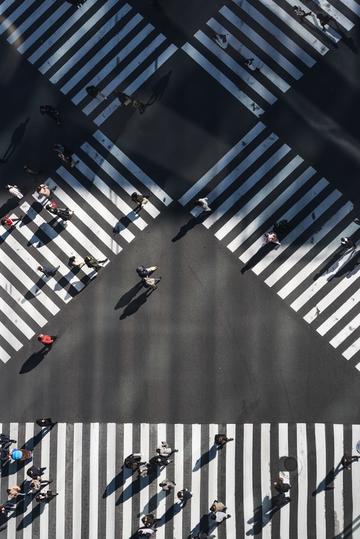 Support for the far right is often explained with reference to a 'cultural backlash' against cosmopolitanism, globalisation and immigration. Drawing on a new study, Professor Daphne Halikiopoulou (University of Reading) and Dr Tim Vlandas (Oxford's Department of Social Policy and Intervention) explain that while these cultural explanations have some merit, there has been a tendency to overlook the importance of economic concerns about immigration for the electoral success of far right parties.

Academics and pundits alike often attribute the rise of the far right to cultural threats. This argument is based on the strong empirical association between anti-immigration attitudes and far right support found in many studies. In short, far right supporters tend to be individuals who fear immigrants because they see them as a threat to their nation’s cultural norms and values.

The theory behind this is straightforward: in a post-material world societies are divided not by ‘haves’ and ‘have nots’ but by those who support and those who reject multi-culturalism, cosmopolitanism, and globalisation. This ‘cultural backlash’ against multiple dimensions of globalisation defined by immigration scepticism translates into voting through support for far right parties that own the immigration issue.

The cultural grievance story indeed captures the motives behind some, but not all nor even most, far right voters. Herein lies the problem: automatically equating immigration with culture overlooks the economic dimension of immigration scepticism that also motivates voters to a great extent.

Voters with such economic-related immigration grievances are not only an important targeted constituency of the far right; they also constitute a sizeable percentage of the far right electorate – often even a numerical majority – especially in countries with successful far right parties.

It is important, therefore, to consider not only the statistical significance of a characteristic – in this case cultural fears over immigration – and the magnitude of its effect, but also the size of voter groups that share this particular characteristic.

Specifically, we show that while cultural concerns are a stronger predictor of far right party voting behaviour in a statistical sense, this does not automatically mean that they matter more for far right party success in substantive terms. We argue that this assumed link between predictive power and substantive importance suffers from an atomistic – or individualistic – fallacy because it overlooks the composition dimension or, in other words, the size of the group that shares this particular concern and how widespread this concern actually is among the electorate.

This can be illustrated using the following hypothetical example: suppose first the electorate is composed of 110 voters and, second, that all are concerned about immigration with the following differences: 10 of these voters see immigration as a cultural threat, whereas the remaining 100 see it as an economic threat.

Far right parties share a common emphasis on nationalism and a purported conflict between in-groups and out-groups. Their programmatic agendas are dominated by the prioritisation of the in-group in every social issue, for example access to welfare and jobs. They own the immigration issue and are ideally placed to propose nationalist solutions in debates about entitlements to national membership. As such, these parties primarily target voters with nationalist concerns relating to immigration who can significantly increase their electoral fortunes.

But nationalist concerns do not necessarily revolve around culture, and immigration concerns are not only of a cultural nature. Nationalism has several components including the ethnic, cultural, territorial, and economic. Anti-immigration attitudes can be linked to one, all, or some – in the form of a combination – of these components. Different parts of the electorate might have distinct party preferences as a function of the origin and extent of their grievance, as well as the degree to which they associate with the proposed party’s nationalist platform.

On the one hand, core far right voters, whom we term the ‘culturalists’, are more likely to be primarily concerned with the cultural threat posed by immigration and to identify with all elements of nationalism and, by extension, the entire far right party platform. These voters see far right parties as their natural home.

On the other hand, peripheral far right voters identify only partially with this platform. As such, their support is more contingent. This includes groups primarily concerned with the economic impact of immigration, which we call ‘the materialists’. These voters are likely to support the prioritisation of the in-group on economic grounds but do not necessarily identify with the other nationalist elements of far right agendas.

Our research confirms that culturalists are core far right voters. Data from eight waves of the European Social Survey suggests that both economic and cultural concerns matter, but that the latter has greater predictive power. Thus, having cultural concerns is more strongly associated with voting for far right parties.

Yet, it does not follow that economic concerns over immigration are irrelevant. First, the predicted probability of voting for the far right nearly triples when individuals have both types of concerns compared to when they only have cultural concerns (Figure 1 below).

Figure 1: Predicted probability of voting for the far right for different combinations of economic and cultural concerns over immigration 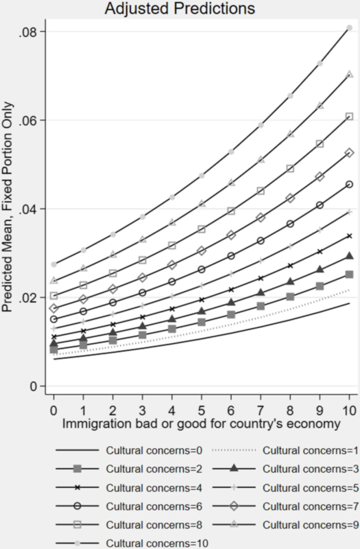 Second, many voters have economic-related immigration concerns. Figure 2 below plots the distribution of respondents with different types of concerns for each country’s far right electorate. This includes just economic; just cultural; both; and neither type of concern. In a range of European countries, those with pure economic concerns are more numerous among the far right electorate than those with pure cultural concerns. 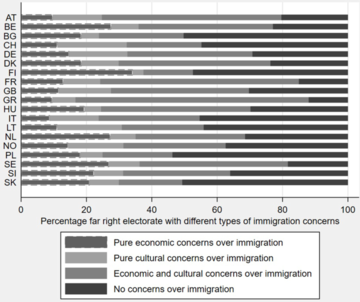 In sum, the size of, and coalition potential between, different groups with distinct immigration concerns plays a key role in explaining successful far right party electoral performance. While the cultural grievance story tells us who is more likely to vote for the far right, it doesn’t tell us under what circumstances far right parties are likely to expand their mobilisational capacity.

In order to answer this latter question, we need to focus on those peripheral voters with economic grievances over immigration. If we are right, deterring these voters is key for limiting the electoral potential of the far right. This has significant policy implications: the economic dimension of far right party support is often underestimated. Policy-makers need to pay attention not only to policies related to national identity and cultural values aimed at deterring core supporters, but also to the underlying economic insecurities that trigger those anti-immigration sentiments, which in turn often translate into voting for the far right.