Coronavirus - the making or the unmaking of Universal Credit? 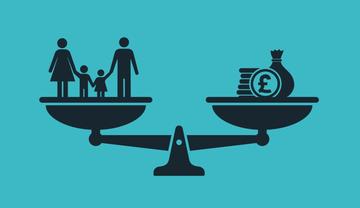 Fran Bennett is a Senior Research and Teaching Fellow here in the Department of Social Policy and Intervention. Fran has recenty been appointed as a Visiting Fellow at the Institute for Policy Research (IPR), and is working on the ESRC-funded project, 'Couples balancing work, money and care: exploring the shifting landscape under Universal Credit'. This blog was first published on the IPR blog.

The coronavirus crisis is changing our world in many different ways and will continue to do so for the foreseeable future. In the UK, social security provision is clearly one of the critical responses both to the health effects of the virus itself and to the need to shut down parts of our economic and social life in order to control it.

Although there have been calls to introduce a universal basic income as a more comprehensive response to the crisis, what we have to rely on currently is the existing framework of benefits, including Universal Credit. And the impact of COVID-19 on how Universal Credit works and what it stands for is fundamental.

Some of these effects are already obvious. As noted by Rita Griffiths in a recent IPR blog, for example, one of the first steps in the government’s strategy was to increase the standard allowances in Universal Credit (and working tax credit) by some £20 per week for the coming year. This was in addition to the first uprating after a four-year freeze, which was due to happen in early April in any case. For self-employed workers affected, the minimum income floor, which assumed a certain level of monthly profits regardless of the actual amount, has been lifted, at least temporarily, as well.

The other immediate impact is that almost a million people have applied for Universal Credit within a fortnight, ten times the usual rate. The Department for Work and Pensions (DWP) is now recruiting additional workers to cope with this, as well as redeploying 10,000 staff from non-essential tasks. The DWP has also suspended for the moment the ‘managed migration’ move to Universal Credit, which involved the DWP moving people on to Universal Credit in a controlled experiment in Harrogate. However, according to a report in the Financial Times (3 April 2020), it is unable to say how many new Universal Credit claims have been processed, or had passed verification checks.

This is the first of the fundamental shifts in relation to Universal Credit. Up to now, there had been growing indications that people were reluctant to apply for it. Whilst the government denounced ‘scaremongering’, and invited MPs to visit their local job centres to see for themselves what a good job work coaches were doing, this had not seemed sufficient to stem the trend. Indeed, the latest delay in the rollout of Universal Credit, to September 2024, was announced as a result of lower than expected numbers moving on to it due to ‘natural migration’ (new claims or a change of circumstances). Ministers argued that this was because there was broad stability in people’s lives. But there was also speculation that it was at least in part due to people trying to avoid claiming.

Now this has been decisively reversed. Indeed, one anonymous civil servant was quoted in the Financial Times (26 March 2020) as saying that the coronavirus crisis ‘could be the making of Universal Credit’. And Nicolas Timmins of the Institute for Government has suggested that coronavirus is giving Universal Credit ‘its moment in the sun’. Certainly huge numbers of applications are being processed, albeit with some delay. In part, this may be due to the additional £20 plus per week, which for some of those out of work already may make Universal Credit more attractive than other benefits, which have not been increased in the same way, as the Joseph Rowntree Foundation has noted. It may also be because feedback from stakeholders has resulted in Universal Credit being improved in various ways. But overwhelmingly, it is likely to be the result of people losing their jobs - or keeping them, but working fewer hours.

So the idea that Universal Credit would result in ending so-called ‘welfare dependency’ is the first of its tenets that cannot stand in the current situation. Universal Credit was originally set up with the long-term goal of moving people off benefits altogether. Receiving state support or not, whether in or out of work, began to be seen as the major dividing line between people (rather than, as was often the case in the past, being in employment or not). Now we are all in this together, to coin a phrase, and it is harder to see having to rely on benefits in or out of work as a sign of personal failure.

Similarly, the idea that setting up Universal Credit to be assessed and paid monthly, with claimants taking responsibility for rent payments themselves, was a good idea because it prepared claimants for entering the world of work and managing their household budget is being exposed as the wishful thinking it always was. There were always going to be many thousands on Universal Credit, with chronic health conditions or severe disabilities, who would never return to paid employment in any case. And for others, the labour market that many Universal Credit claimants were either ejected from or expected to enter was never anything like the stable, salaried employment envisaged in this vision. But in the current crisis, when the gig economy, zero hours contracts and self-employment have been exposed for the risky enterprises that they are, this mirage can no longer be sustained. In addition, it is arguably those long used to managing from week to week, or even day to day, who are likely to have more to teach the rest of the population about budgeting today.

Furthermore, the idea that Universal Credit is about supporting and mandating work has also gone by the board in the current situation, with work search and sanctions having been suspended at least for the three months to come, according to the Secretary of State for Work and Pensions (25 March). Taken from the House of Commons library briefing, regulations in force from 30 March provide that work-search requirements for Universal Credits and ‘New Style’ Jobseeker’s Allowance will not apply for three months, and it is unclear whether sanctions might still be applied for other reasons, such as failing to meet work-preparation requirements. Although sanctions had already decreased in number relative to their peak after Universal Credit was introduced, they still hung over claimants as an ever-present threat, making the experience of claiming Universal Credit for some more like ‘universal dread-it’, as one MP expressed it. This move will make life very different for many.

So - despite the Secretary of State’s claim to the Work and Pensions Committee that ‘the underlying principles of Universal Credit have not gone away’ – it is currently a rather different animal. It is true that the basic structure and design have not been fundamentally changed, at least to date. In particular, in the same oral evidence session last month, Therese Coffey made it clear that the five-week wait would remain (albeit with advance payments available as loans). This is because the monthly assessment period, which lies at the root of many of the problems experienced by claimants, remains unchanged.

Moreover, as explored by the current ESRC-funded IPR research project on Universal Credit and couples, outdated assumptions about family life still remain as cornerstones of Universal Credit design. So there is still only one payment into one bank account for couples. Incentives for the main earner in a couple are much more positive than for many ‘second earners’, most often women returning to the labour market after having children.

In addition, the joint assessment of needs, income and assets for couples is similar to other means-tested benefits; but the (almost) all-in-one nature of Universal Credit and the integrated payment make this an even more significant issue. Many new claimants, if unable to claim contributory benefits, may not have anticipated becoming financially dependent on their partner because of this. And a joint claim becomes an even riskier enterprise for those thinking of entering into the committed coupledom the government wishes to encourage.

So some key elements of Universal Credit design and the thinking behind it survive to live another day – at least for the moment. But others are falling by the wayside. It remains to be seen whether this new benefit, sometimes claimed to be the most fundamental transformation of the UK welfare state since the Second World War, will be recognisable to its original proponents once it emerges from the current crisis.