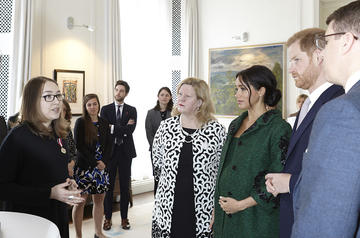 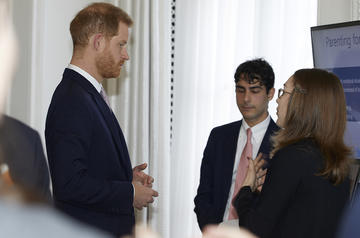 Mackenzie talking about her work with Prince Harry

The break between terms does not mean our students are slowing down - in fact, some are having an action-packed vacation. Last week, MPhil EBSIPE student Mackenzie Martin was invited to Canada House, the London home of the High Commission of Canada. Mackenzie was among a small group of young Canadians working, studying, and living in the UK who were invited to meet the Duke and Duchess of Sussex in honour of Commonwealth Day on March 11.

Mackenzie was one of two Rhodes Scholars who presented their academic work to Prince Harry and Meghan at the event. Mackenzie spoke about the Department's Centre for Evidence-Based Intervention project 'Parenting for Lifelong Health' (PLH) which is the focus of her MPhil thesis (supervised by Professor Frances Gardner and Dr. Jamie Lachman) and work as Research Assistant in the Department.

This is not Mackenzie's first connection with the British royal family - the medal you can see her wearing in the top photograph is a Queen Elizabeth II Diamond Jubilee Medal that she received in 2012 for her work on raising awareness on the issues girls face around the world. She was nominated for the prestigious medal by former Minister of the Status of Women in Canada, Rona Ambrose.

It is fantastic to see Mackenzie using the knowledge and skills she has developed through both her community work and MPhil studies to deepen her understanding of how to use research to make a difference in global communities. These Commonwealth Day celebrations provided Mackenzie with a rare opportunity to share these insights and the Department's work on the Parenting for Lifelong Health programme with an influential audience.