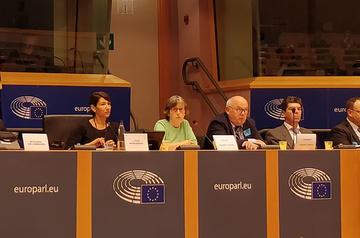 Mary Daly (in green) at the European Parliament

On September 24, Professor Mary Daly spoke at the European Parliament to the Employment and Social Affairs Committee on fighting child poverty in the EU and especially the proposal for an EU-wide Child Guarantee. At the meeting she underlined the following:

With about a fifth of the EU’s children living below the poverty line, the Child Guarantee is a very important initiative.The Guarantee was originally proposed by the European Parliament in November 2015. It seeks to give all children in Europe access to free healthcare, free education, free early education and childcare as well as adequate nutrition and decent housing.The Guarantee especially considers the situation of Europe’s poorest children. In this regard and also in terms of its focus on services for children, it is very innovative in an EU and also national and international context. It is especially concerned about the social safety net for children and their families. It is a very welcome initiative in light especially of the depth of poverty and disadvantage among some children in Europe and the fact that the gaps in poverty and inequality among children are increasing. It is not easy to identify the group of children that should be targeted for the Guarantee, however. Professor Daly suggested as a first step that policy would focus on those children whose family income falls below 40% of median income or children who live in households which experience all three of the constituent elements in the EU definition of poverty and social exclusion: that is they fall below the official poverty line, they experience severe material deprivation and they live in jobless households.