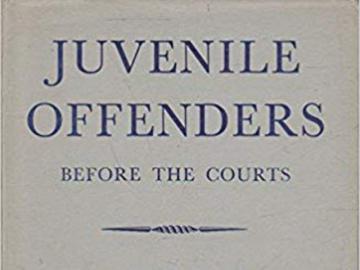 Our department has a long history of men and women who were pioneers in the Social Sciences. Max Grünhut was one of these. A humane criminologist, he first made his name in Germany in the 1920s as an opponent of capital punishment, a specialist in juvenile crime, a believer in prison as a time for education and redemption. Of Jewish descent, though himself a practising Christian, he was denied the right to work as an academic in the Third Reich, and from the early 1930s he looked – with increasing desperation, judging from his letters, for ways to leave the country.

Professor WGS Adams, the president of Barnett House at the time, as well as Master of All Souls, was for several years in correspondence with another Walter Adams, General Secretary of the National Society for the Protection of Science and Learning, and on the academic resettlement committee which helped resettle German refugees. For a long time Max Grünhut’s requests to come here came to nothing despite Adam’s attempted interventions. Correspondence at the time, recently unearthed by Sarah Weydner, show Adams’ committees concluding that one eminent criminologist from Germany was enough for Britain – they already had Herman Mannheim – so they could not find a post for Max Grünhut as well. The best they could do was to offer him a short teaching fellowship at LSE – which they did – but this did not offer him sanctuary.  However, in 1939, as Grünhut's plight became increasingly desperate, Adams found a way to bring him to Oxford, to All Souls, and to lecture, teach, and research at Barnett House. He was warmly received, and enriched life here, doing a ground breaking study on the effects of evacuation on London school children. This never found its way fully into print at the time, though OUP published a short version after the war. He lectured students in Barnett House on criminology and continued to specialise in juvenile delinquency – thanks to Adams he was made Reader in Criminology in the University of Oxford and established Criminology as a discipline.

We look forward to Sarah Weydner’s research turning into papers or a book before too long.

Many thanks to Paul Hitchings, who pointed out a factual error in a previous version of this article