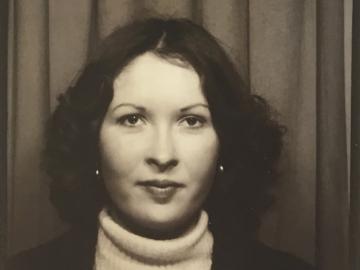 As part of our ongoing series of staff and student profiles, we caught up with Kathy Walker. With an impressive 41 years at Barnett House, our Departmental Finance Officer has lots to share with us about her experiences here over the years.

How did you first come to work for this Department?

I started working for the Social Evaluation Unit at 40 Wellington Square in August 1976, this Unit was part of the Department of Social and Administrative Studies, which was based at New Barnett House in Little Clarendon Street.  I was employed by George Smith as a research secretary, which was a two-week temp position. After that  I was offered the post permanently.  I only went for two interviews and my other job offer was with Pergamon Press in Headington, which was run by Robert Maxwell, but I chose Oxford University!

What was working life like in the late 1970s?

I originally worked with an old manual typewriter and a huge duplicating machine which had its own room and 4 or 5 gears to get it going and was shared by a unit of the Department for International Studies.  The building I worked in was also used by the Voltaire Foundation and the building had caretakers who lived in the basement.  There were no computers for the admin staff, but we did have a state of the art golf-ball electric typewriter which replaced my manual typewriter.  My job involved typing up various research reports, letters and minutes and I often delivered work to the teaching Department in New Barnett House.  My wage was paid weekly in cash which I would collect from New Barnett House in person and deposit in Barclays Bank, which was also in Little Clarendon Street, opposite New Barnett House.

When did you move to the building we’re in now?

In 1979 the Department moved premises to Barnett House, 32 Wellington Square, along with other researchers who were based in Dartington House, Little Clarendon Street and also the Departmental Library which was based at 16 Wellington Square.  The Director of the Department was Professor Halsey and the Administrator was Julia Parker, who was also a member of the Academic teaching team.  I moved onto the second floor with the research teams and my job involved typing up research interviews and reports.  As computers were introduced we began working with floppy disks and I also learnt how to code research interviews and write out the coding on Fortran sheets ready for computing.  I worked with Barbara Hudson, who was the Editor of The British Journal of Social Work and also a member of the teaching staff at Barnett House.  I would send articles and papers to reviewers and then type up the final versions ready for publication.  I also helped students with typing up and photocopying their theses.

How did you come to move into a finance role?

Can you give us an insight into what your role now involves day-to-day?

I am happy in my current post as Departmental Finance Officer. On any given day this might include managing and matching the purchasing in the Department, liaising with the purchasing team and suppliers regarding ordering, deliveries, purchase orders and invoices via a purchase order log system which I devised.  I deal with all daily accounts queries and emails external and internal to the University. I administer applications to the Student Support Fund and Committee and the Staff Research Support Fund and Committee. I work with Sophie and Susan regarding the end of year accounts. And much, much more!

Which was your favourite decade to work here, and why?

My favourite decade working at the Department was probably during the 1980s, when technology was developing quickly and we were constantly updating and learning together as a team and the Department was growing and changing too.  The Department held many social events that would be attended by the whole department, usually led by the Heads of Department and these times stay with me as happy memories.  I have thoroughly enjoyed meeting all of the people that have passed through the Department over the years and I still keep in touch with some of them today.

Many thanks to Kathy for this fascinating insight on the evolving environment of Barnett House.