Outstanding International Impact – from 32 Wellington Square to the world 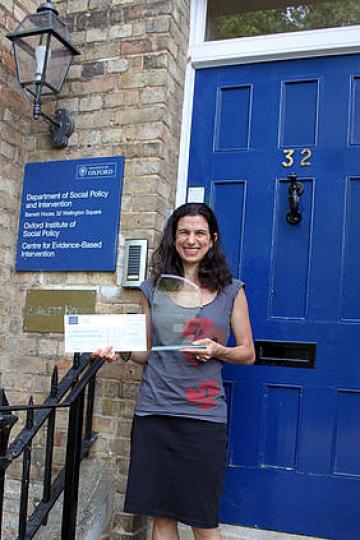 We are delighted to announce that Professor Lucie Cluver’s team have won the 2017 Economic and Social Research Council award for Outstanding International Impact. Lucie’s work on HIV prevention in Southern Africa was recognised at the ESRC Celebrating Impact ceremony at Westminster Hall, London on 21 June.

The research that Lucie and her team have conducted has led to the roll-out of ‘Cash plus Care’ social welfare packages in ten southern African countries since 2014. This approach has helped over 2 million girls avoid contracting HIV/AIDS. We caught up with Lucie earlier to find out what’s next.

Lucie, congratulations on your ESRC Outstanding International Impact prize! What does an award like this mean for you and your team?

“Actually, this award is completely due to the team. The Oxford and South Africa teams, and all the students and volunteers involved have worked their guts out on this study for years. They did it because they believed this research could make a difference, and this prize shows that it really has. It’s always nice to receive a cheque for £10,000! We’re going to spend it on our Teen Advisory group – 20 teenagers who have helped with our research and impact over the years.”

What does Summer 2017 hold for your team?

“We’ve just started our third year of data collection for the world’s largest study of HIV positive adolescents. The field team are working away at that. We’re giving presentations at UNICEF, the World Health Organisation, UNAIDS and other partners. We’ll be raising more money for our future work with vulnerable teenagers. And drinking a lot of iced coffee!”

To find out more about the award you can read a fascinating case study on the ESRC site and watch their video on Lucie’s work.

Evidence-based interventions that enable policy-makers and governments to make informed and effective decisions are at the heart of our Department’s work. We are rightly proud of Lucie and her team for this latest recognition of the worldwide impact of research that has small beginnings in a quiet tree-filled square in Oxford.

For the full list of the Impact Prize winners 2017 please see here.