Spotlight on graduate research: Adaptation to increase in income 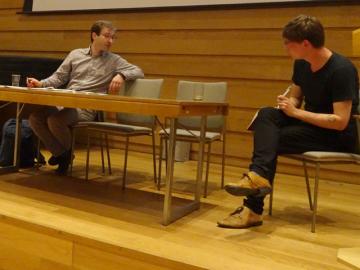 A glimpse of what our DPhil students are working on, as overheard at our 2018 Graduate Research Student Conference at Wolfson College on 25 May 2018.

Caspar’s research explores questions like: Do you become more satisfied with your life if your income increases? Does your satisfaction stay up permanently, or will it decrease after time? He is comparing two datasets – the German SOEP and the UK’s HLS.

He explains the concept of adaptation – which occurs when the short-run effects are greater than the long-run effects of a particular change. It matters whether adaptation is full or partial. If it’s full, in his area of research, this would mean that income increase doesn’t really matter in terms of how happy it makes you, because after an initial spike, your satisfaction levels will adapt back to where they were. But if adaptation is partial, you will feel more satisfied with your life on an ongoing basis.

So what is Caspar’s research showing so far for Germany and the UK – are we ‘adapting’ to our income? It can be hard to tell – there are many variables, and some results may be unreliable for this question (e.g. unobserved costs of income generation, or misreported income). But it looks as if adaptation is happening in Germany, and in particular amongst German women, and for those in the middle of the income distribution. Adaptation to income is not a universal truth.

The format of the conference meant that Caspar’s presentation was then discussed by Dr Alexi Gugushvili, Postdoctoral Research Fellow, who raised a range of questions and issues for Caspar to respond to – including the need to think carefully about which specific journal he might intend to publish his work in, the sociological implications of his findings, more variations to consider, and more effort to explain some of the findings. Caspar faced a range of provocative comments from the audience, and took away some useful insights for furthering his analysis.

After the conference we caught up with Caspar to ask how he found the experience of presenting to his fellow students and faculty members. “Overall it was a great opportunity to share my research with fellow students and members of faculty from the department. On the one hand it was good to get in-depth feedback from a Social Policy audience (instead from, say, economics or sociology) in particular. On the other hand, I think that events like this really bring a research community like ours together. That is nice on a personal level, but may also lead to some cross-fertilization academically.”