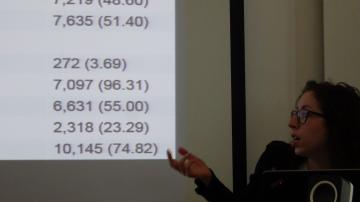 A glimpse of what our DPhil students are working on, as overheard at our 2018 Graduate Research Student Conference at Wolfson College on 25 May 2018.

To get the afternoon session started, Alexa Yakubovich, a third year Social Intervention DPhil student supervised by Dr David Humphreys, presented on ‘Intimate partner violence against women in early adulthood: Results from the Avon Longitudinal Study of Parents and Children.’

Alexa began by giving some general background to her research. Intimate partner violence, or IPV, is any actual or threatened violence committed by a current or former partner – physical, emotional or sexual. It’s the most common form of violence committed against women. Lifetime prevalence for women in UK is 22.9% (compared to 11.0% for men). There’s currently very little evidence for interventions which effectively prevent this type of violence. In order to work out why interventions aren’t effective, we need to understand risk and protective factors, and the best evidence for these comes from studies that measure participants over time.

There’s one particular prevalent hypothesis Alexa wants to examine - that neighbourhood deprivation links to IPV. The idea is that exposure to more deprived or violent neighbourhoods may raise the risk of IPV. Alexa has recently published a systematic review of 60 longitudinal studies in the American Journal of Public Health, which investigated a total of 71 risk/protective factors for IPV against women. However, very few of the available studies looked at structural and community level factors. The available evidence showed a protective association between neighbourhood disadvantage and IPV, but Alexa noted this may be due to biases unaccounted for in the included studies. Alexa highlighted that all of the available studies of this association are American, and most only looked at neighbourhood disadvantage measured at one time point.
The remainder of Alexa’s thesis is focused on advancing the investigation of the association between neighbourhood and structural disadvantages and IPV against women. She is currently analysing a longitudinal dataset (ALSPAC). As she starts to look at neighbourhood deprivation, there’s a lot to think about in the data. For instance, there’s significant attrition – people who start out in the study are no longer present in the area at a later check-point. There are also several factors that may be associated with both neighbourhood deprivation and IPV over time that could bias analyses if not adjusted for. Alexa is using advanced techniques to account for these complexities and triangulating across methods for robust conclusions.

The outcomes of this research, and subsequent replication, matter: whether neighbourhood-level deprivation contributes to IPV will influence whether neighbourhood-based interventions for deprivation can be expected to be effective in preventing and reducing this violence. IPV continues to be devastating to women worldwide, and effective intervention needs to be based on sound evidence.

The format of the conference meant that Alexa’s presentation was then discussed by Dr Matthew Donoghue, Departmental Lecturer in Comparative Social Policy who raised a range of questions and issues for Alexa to respond to. She talked more about the mixed evidence on neighbourhood deprivation in her systematic review and the lack of theory testing regarding this association. For example, criminological studies have demonstrated links between neighbourhood deprivation and public forms of anti-social behaviour but it remains an open question as to whether the hypothesised mechanisms driving these associations would also apply to more private spaces (where IPV often occurs). Ultimately the influence of neighbourhood and structural factors on IPV against women over time remains largely under-explored and Alexa hopes to continue testing these associations using rigorous methods. She also responded to questions about the attrition rate in the data, why she chose to focus on women, and much more.

After the conference we caught up with Alexa to ask how she found the experience of presenting to her fellow students and faculty members. “I am very grateful for the opportunity to present my research to such a supportive and thoughtful audience. Rarely as academics do we get to present ongoing analyses in a conference format and this was a great to chance to receive fresh perspective from my peers, all from diverse disciplines and backgrounds across the Department, which I can now incorporate into my final papers.”