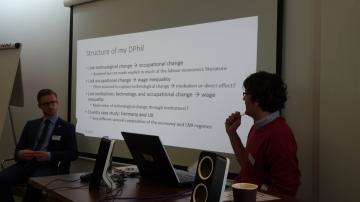 A glimpse of what our DPhil students are working on, as overheard at our 2018 Graduate Research Student Conference at Wolfson College on 25 May 2018.
First year DPhil student Matthias Haslberger started us off on the Social Policy side with his presentation: ‘Understanding Wage Inequality – The Role of Technology and Institutions.’ Focussing on the OECD, Matthias’ research explores the drivers of wage inequality in a context where ‘broadly speaking, inequalities of wages, income and wealth have increased over the past 30 years.’ Although the overall trend is towards greater inequality, he notes that there is considerable variation in both levels and trends of inequality, e.g. in UK wage inequality in the bottom half of the distribution has slightly decreased, although overall wage inequality has increased.
For Matthias, his studies at master’s level (also at DSPI) were a vital foundation to what he’s doing now. In his MSc work he drilled down into inequality in bottom and top halves of wage distribution, and among women and men separately. His theory for his master’s thesis was that ‘strong labour market institutions should compress wage distributions by increasing the bargaining power of workers.’ He did indeed find that unionisation, employment protection, and a high minimum wage overall have a reducing effect on overall wage inequality.
He is now looking at the role that technology is playing in the labour market – focussing just on institutions would disregard the ‘massive structural changes linked to technology’. For example, he notes that ‘routine’ employment is on the decrease. Matthias has a big job on his hands: he’s trying to integrate two separate literatures in labour economics and comparative political economy. His overall research question is ‘How, and how much, do labour market Institutions affect how technological change influences wage inequality.’ Matthias is doing a paper-based DPhil, which means he will produce 4 papers over the course of his research, finishing with a country case study on Germany and the UK.
The format of the conference meant that Matthias’ presentation was then discussed by Dr Thees Spreckelsen, Postdoctoral Research Fellow in Quantitative Methods who commented: ‘I really like the way you set up your MSc to inform your DPhil.’ He asked Matthias to comment on how much of the technological change is genuinely new?’ ‘We don’t really know if this time is different. We’ve always had technological change… and there’s always been this hype ‘this time it’s really different’… I still think it’s very likely we see technology affecting inequality… but maybe less than purely economic studies find… Still, I do think there is a role for technology… What I’m trying to do compared to most economists is to see it in a more holistic way.'
Then came a torrent of questions for Matthias to consider on the spot. There was interest in the room about how he’s going to measure the impact of technological change – the methodology, and many further technical and broader questions about his MSc work and current approach.
After the conference we caught up with Matthias to ask how he found the experience of presenting to his fellow students and faculty members. “As a first-year DPhil student, it was helpful to present at an early stage and receive feedback from faculty and fellow DPhils who were at the same stage one or several years ago. I'm particularly grateful to the students who organised the conference this year and the faculty members who took the time to attend.”