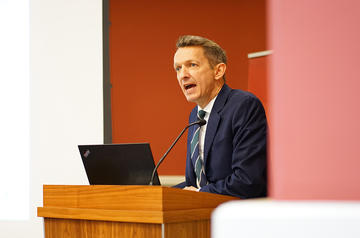 Income insecurity and its impact on households is the economic scourge of the early 21st century for the UK, the Bank of England’s chief economist told an audience at the Oxford Martin School.

Andy Haldane was delivering the keynote address at ‘Income insecurity in the 21st Century’, convened by the Department of Social Policy and Intervention, INET Oxford and the Oxford Martin School. He contrasted the UK’s current high employment rates with those of the late 1970s and early 1980s, when one in nine people was out of work, but said that employment in the earlier period generally meant people were on an “escalator” of relentlessly rising wages, whereas they were now on a “travelator”.

“There was also a pretty clear distinction then, and in the decades that followed, between those out of work and those in it,” he said. “If you were in work you tended not to be in a situation of poverty. But research now shows that of people living in poverty, more are employed than unemployed.”

Mr Haldane went on to say that the past ten years had been a “lost decade” for many in terms of income, with real pay no higher than at the dawning of the 2008 global financial crisis, the longest period of flatlining since the start of the Industrial Revolution. This had been mirrored, he said, by flatlining UK productivity.

Changes in the nature of work - such as the growth of zero-hours contracts - had been a good thing for some, he said, with more flexible hours enabling people to combine study or home life with employment, or take a gradual route to employment rather than facing a “cliff edge”. But insecure jobs were often ones where people were paid less, he said, and pointed to income insecurity being associated with worse prospects for home ownership and less mobility within the job market, meaning people were less likely to move to a better paid job. This in turn meant new ideas were less likely to spread through the economy, he said, and that insecure working arrangements and poor quality jobs were possibly linked to the UK's productivity problem. Ultimately those suffering income insecurity were also more likely to have to take up high cost credit arrangements to make ends meet, he added.

He cited a number of pieces of recent research showing that people would be prepared to take a wage cut of 20% in order to avoid unpredictable hours, and that adults in debt were three times more likely to experience mental health problems.

Matteo Richiardi looked at the weaknesses of existing measures of economic insecurity, and spoke about a new measure being developed at EUROMOD. It is a dynamic framework which will take both income levels and changes into account, and will consider labour market risks as well as family-related and health risks. He hopes it will be used to help predict people's forward trajectories, bearing in mind the expected stream of welfare resources available to them.

Jane Millar then spoke on the implications of income insecurity for social security, drawing examples from the UK and Australia, before considering the ways in which the UK's Universal Credit system can exacerbate income insecurity. She questioned how far a social security system like this should be responsive to short-term changes, rather than giving people enough security to make the more permanent changes that could bring a greater stability. During the panel discussion, Fran Bennett gave a reminder that it is important to also think about economic insecurity within the household - having all your 'eggs' in one person's basket further exacerbates the risks. She also spoke about the other parts of our social security system beyond Universal Credit, commenting that social insurance has become more rigid as the labour market has become more flexible, and this demands attention. Fran and Jane have just been announced as specialist advisers to a House of Lord's committee on the economic impact of UC.