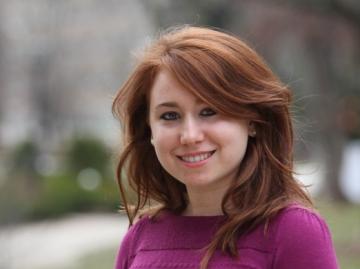 We are always delighted to hear what our alumni are doing in the world. Here Rhaina Cohen (MPhil Comparative Social Policy, 2014), tells us about her work in radio and a particular recent podcast that struck a nerve.

Months before I walked through customs in Heathrow or put on a subfusc (or could tell you what a subfusc is), I knew what I hoped to do after I completed my MPhil in Comparative Social Policy. I wanted to work as a journalist in the U.S., in particular, in public radio. As an undergraduate I had been involved in journalism, and I was already years into my obsession with podcasts. I thought that I would be a more skilled, nuanced journalist if I had an area of expertise to provide a foundation for my reporting. The CSP MPhil, I believed, would deepen my understanding of inequalities and social policy--areas I wanted to cover as a journalist.

The aspiration I had during my senior year of college worked out remarkably well. I’m now a producer at National Public Radio for the podcast and radio program Hidden Brain. The show’s episodes are heavily rooted in social science research. Some of our episodes feature long-form interviews with experts, like a scholar of sleep. Others are more narrative driven, weaving reporting with research from experts, like an episode about how rap music has been used to convict people in criminal cases and how we’re all affected by implicit bias.

Earlier this year I was involved in putting together an episode that felt especially meaningful and timely and is related to my long-standing interest in gender inequality. Amid the sexual harassment reckoning that’s rattled entire industries across the U.S., our show’s team wanted to provide insight—the sort of bigger picture understanding that is difficult to get when you’re in the thick of an ongoing news story. The hope was to present research from the social sciences that would help us make sense of what’s happening now. At a editorial meeting all of the producers pitched possible approaches to an episode on sexual harassment. Eventually, we narrowed in on one question: why now? Why, when sexual harassment has been part of the vernacular for decades, are we only now taking sexual harassment and assault claims seriously? Why are women (it is mostly women who are making these allegations) now comfortable coming forward?

The individual story we reported on was especially well-positioned to help answer this question. We spoke to several women who accused the playwright Israel Horovitz of sexual misconduct. Without giving away too much of what makes the story shocking and unsettling, I can say that Horovitz faced two rounds of accusations, the first in 1993—nearly a quarter century before Harvey Weinstein’s descent—the second, in November 2017. His life changed little after the first group of women made their allegations public. His career collapsed after the second group did. These divergent outcomes prompt the question, why was there such a different response this time around? In addition to an unforgettable story, told through the voices of four women, the episode offers a framework to understand sexual harassment. In keeping with our show’s interdisciplinary spirit, this episode highlights ideas from a political scientist, a psychologist, and a gender studies scholar.

Because we were trying to turn around this episode quickly, even more than usual, it was an all-hands-on-deck situation. Early on in the process, our host, supervising producer, writer, and I had meetings to figure out a blueprint for the episode; we tried to determine what the structure of the episode would look like and the different elements we would need. I tracked down women who had accused Horovitz in a 2017 New York Times article and spoke to them about participating in the story. I also booked the professors who were interviewed for the episode. Hidden Brain’s supervising producer hired actors to perform some excerpts of a relevant Israel Horovitz play. After the host did the interviews, we had more editorial meetings to make a detailed map of the episode’s structure. Our writer shut herself away in an editing room to pull the best moments from about 10 hours of interviews. She created a script from those moments, guided by the blueprint we had worked on. Once she turned around a draft, the four of us had editing sessions that lasted for 3 or 4 hours at a time, combing over every word while also thinking about larger scale issues: did we leave out important information? Was there tape that allowed the accuser to explain what happened rather than our host? During the whole script-writing process we had NPR’s lawyers and Standards & Practices editor involved, so we kept their legal and ethical guidance in mind during these edits. When we settled on a script, a producer on our team worked with the host to record his narration (we call this “tracking”) and edited the audio into a draft episode. Our writer meticulously fact-checked every word in the script. Everyone on the team listened to this draft episode and wrote up detailed feedback, which we addressed in further meetings. Our host recorded changes to the narration (we call this “retracking”), our producer made a new version of the episode and sent it off to a composer to score. There were more rounds of listening, discussion, and tweaks. Another producer created final versions of the episode--one for the podcast, the other for radio.

Besides creating the content of the episode itself, we were simultaneously at work on many other things. To name a few: Our producer who creates all of the visual elements for our social media accounts developed promotion material for the show, like this tweet. I corresponded with an archivist to find a photo from a 1989 edition of a local newspaper that showed the accused playwright and one of his accusers side-by-side. I also corresponded with each of the women to answer their questions, fact-check, and ask for photos they could provide us. Our writer wrote up a summary of the story to put on our website. We brainstormed an episode title and individual people and organizations to contact about the episode once it was up.

After the episode went into people’s podcast feeds and aired on their local radio stations, we received overwhelmingly positive, gratifying feedback--including from the four women in the story who’d revisited traumatic parts of their past in their interviews and made those events public. Listeners shared how they were saddened, emboldened, and shocked by the episode. We received consistent feedback that the research helped listeners understand how individual stories of sexual misconduct fit together. Some of the social science concepts in the episode, like “preference falsification,” allowed listeners to make sense of behavior in other areas of life. It’s this combination of the particular, indelible details of a gripping real-life story and the more general principles from rigorous scholarship that gives the episode power. It’s this combination--in which I get to invoke the research knowledge I gained from CSP and help build memorable narratives--that motivates my work.