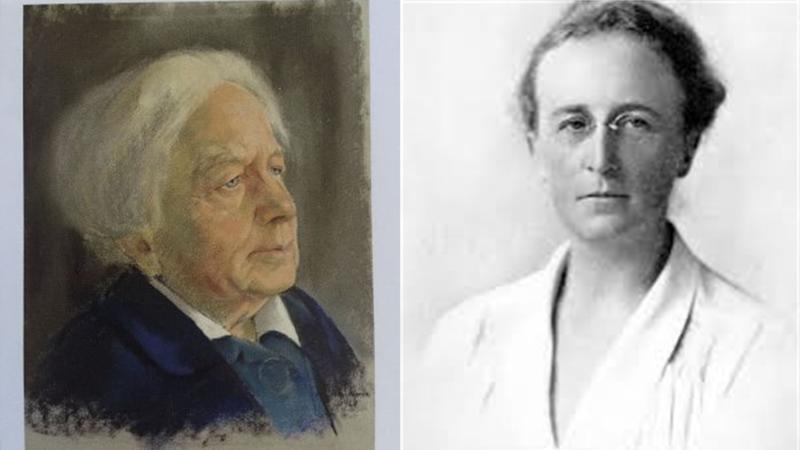 Violet Butler and Grace Hadow have both been honoured with blue plaques in Oxford.

Butler’s plaque was unveiled on 29 October 2021 at 14 Norham Gardens, where she lived from 1884 to 1949. The speaker was Liz Peretz, with Violet's relatives and a host of dignitaries in attendance. Liz's speech and a photo of the unveiling of the plaque have been published on Violet's Oxford Blue Plaque page.

Violet taught economics, women’s studies, and trained social workers in Oxford. She published the acclaimed Social Conditions in Oxford (1912), which revealed the lack of skilled work opportunities for young people and highlighted the paucity of women’s job prospects. She was a key figure in the development of Barnett house in 1914, Oxford’s new centre for social and economic studies and social work training (what was later to become the Department of Social Policy and Intervention). Between 1919 to 1946 she was Secretary for social work training at Barnett House, where she was to inspire and influence many generations of social workers.

Grace Hadow’s plaque was unveiled on 29 October 2021 at 7 Fyfield Road, where she lived from from 1929 to 1940. The plaque was unveiled by Mrs Ann Jones, Chair of the National Federation of Women’s Institutes, and Teresa Smith, Associate Fellow of Barnett House, who gave the main address to host of dignitaries.Teresa’s speech and a photo of the unveiling of the plaque have been published on Grace's Oxford Blue Plaque page.

Grace taught at Lady Margaret Hall and published the Oxford Treasury of English Literature and Chaucer and his Times. She was a founder member of the Oxford Women Students’ Society for Women’s Suffrage and helped to develop the local Women’s Institute in Cirencester. She was committed to adult education for the study and promotion of social welfare and in 1920 these interests led to her becoming secretary of Barnett House. In 1929 she was appointed Principal of the Society of Oxford Home-Students, which was later to become St Anne’s College.