‘We have joy’: Parenting programme for Africa’s poorest communities makes a real difference 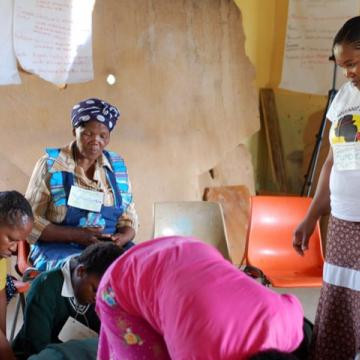 A major initiative to help teenagers, parents and caregivers in disadvantaged communities to form stronger relationships and improve teenagers’ safety has been shown to succeed, according to trial results published today in BMJ Global Health.

Since 2012 the Sinovuyo Caring Families Programme for Parents and Teens has been transforming family relationships in severely disadvantaged communities, where access to services is limited. From its small beginnings in South Africa’s poorest province, the initiative has already rolled out to six other countries (the Democratic Republic of Congo, Kenya, Lesotho, South Sudan, Tanzania, and Uganda) with plans for at least two more in 2018 (Zimbabwe, Haiti).

Known as Sinovuyo in South Africa, which means ‘we have joy’ in isiXhosa, the programme is more broadly known as Parenting for Lifelong Health. It was developed by researchers from our Department in collaboration with the World Health Organisation and UNICEF, the University of Cape Town and the NGO Clowns Without Borders South Africa.  Funding has come from the European Research Council, WHO, UNICEF, Leverhulme Trust and the Economic and Social Research Council.

The cluster randomised controlled trial was conducted with 1100 participants across 40 townships and villages in South Africa. During the trial, the region was beset with severe violence - riots, petrol bombing, violent protests and utility shortages. However, despite such highly challenging circumstances, the programme kept running and supporting families.

Professor Lucie Cluver, Professor of Child and Family Social Work, said: ‘Parenting a teenager is never simple, and families living in low-resource countries deserve the best research evidence to help them. Parenting for Lifelong Health programmes are now reaching over 200,000 children and families in the places that need them most.’

The programme looks set to continue scaling up its impact. The children's version of the programme is already being implemented and evaluated (Frances Gardner, Jamie Lachman) in other regions including East Asia and Eastern Europe.