Who really are the poor? Measuring poverty with multiple dimensions 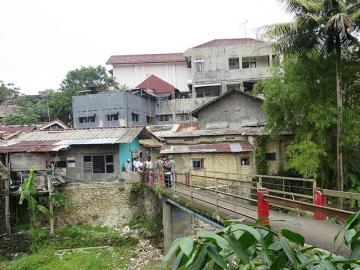 Bogor City, West Java, Indonesia, is one of the most densely population cities in the world. This picture was taken on a site visit with the Mayor and the district government team of Social Welfare, after I completed the Delphi exercise. The aim of these site visits is to conduct weekly meetings with representatives of the district-areas, to pin point urgent welfare issues and respond to these needs. 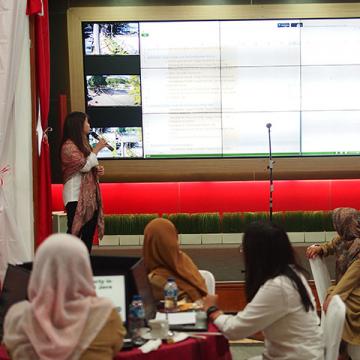 We regularly invite our DPhil students to tell us about their research projects. This week Putu Natih (DPhil Social Policy) tells us about her research, ahead of an event with the Mayor of Bogor City next week.

The trend in poverty is a litmus test of the social quality of economic systems; a poverty measure provides a basis to evaluate the effectiveness of welfare policies and acts as a powerful instrument to focus policy makers’ attention on the living conditions of the poor. Discontent with uni-dimensional measures of poverty reflects widespread agreement that poverty is a multifaceted phenomenon, encompassing deprivations along multiple dimensions. In developing these multidimensional measures, however, there exists substantial debate on how to conceptualize and select the multiple facets of poverty to be included within measurement. Talking of existing multidimensional measures, Ravallion (2012) points toward the arbitrariness in the selection of measure components; Nolan and Whelan (2011) argue that current applications of multidimensional poverty measurement are more often than not ‘rather ad hoc’.

My thesis aims to address the above challenges. Through the use of the Delphi method, it first establishes that poverty is indeed multidimensional and then presents arguments as to which dimensions and indicators should be included within a multidimensional measure and how they should be weighed against each other. I illustrate the application of the proposed Delphi method, through applying a series of iterative Delphi questionnaires in Bogor City, West Java, Indonesia, the case study area chosen. These questionnaires aimed at answering the questions, (1) how should poverty be defined? (2) which dimensions of poverty are relevant for measuring poverty? (3) which indicators are relevant? (4) how should these dimensions and indicators be weighed against one another? Finally, given the complex nature of poverty, (5) can a reliable level of consensus be achieved with regard to these choices? This Delphi study was conducted in August 2016 with Bogor City policy makers as participants. (Picture 1 gives an illustration of the proceedings of the Delphi exercise. The Delphi questionnaires were administered online through a computer-based survey. Around 40 policy makers participated and each had their own computer, where they could input their answers anonymously. Before participants started a new set of questionnaires, results from questionnaires they had completed previously were presented to them).

Results from the Bogor City Delphi exercise confirm that poverty is indeed a multidimensional phenomenon and that the condition of poverty in Bogor City is best described using a ‘dashboard’ measure, which encompasses five dimensions: (1) education, (2) health and safety, (3) asset ownership and employment, (4) environment and adequate living arrangements, and (5) family planning. Significant differences were found when comparing components stated as important within the Bogor City Delphi results, with components of existing uni and multidimensional measures. These differences may lead to contrasts in how measures identify both the size and composition of the poor.