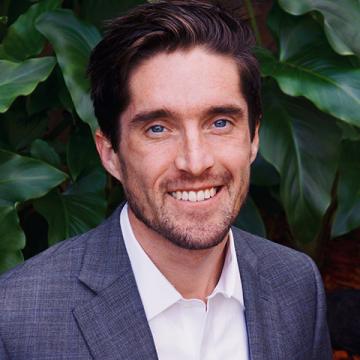 Dr Benjamin Chrisinger is an urban planner by training. He conducts interdisciplinary research on the relationships between place and health, especially health disparities, and the role that place-based policies can improve health equity. His latest work focuses on relationships between individuals' neighborhood perceptions and health disparities, as well as the lasting legacies of historical events or policies. He is also engaged with using new technologies and community-engaged methods in his research.

Dr Chrisinger completed his PhD in City and Regional Planning at the University of Pennsylvania, and Masters and Bachelors degrees in Urban and Environmental Planning at the University of Virginia. Prior to joining the Department, Dr Chrisinger was a postdoctoral research fellow with the Stanford Prevention Research Center, a division of the Stanford University School of Medicine that specializes in behavioral research and interventions, including those at the community level.

1) How do individuals navigate different places to access different resources?;

2) How do neighborhood perceptions influence behavior?; and

3) How is community development related to health inequality?

His early work related to access examined policies and programs in the United States to open supermarkets in underserved areas ("food deserts") by considering development processes, store-level outcomes, and community and customer experiences. Through both quantitative and qualitative research on food access, Dr Chrisinger has found the influence of individual perceptions to feature prominently, which raises ciritcal questions about how one’s perceptions of resources (e.g., a particular supermarket) and the contexts around them (e.g., built and social environments around it), also influence individual behavior. In a recent project, Stress Experiences in Neighborhood and Social Environments (SENSE), he developed new protocols for using physiological data to map and contextualize understand individuals' neighborhood perceptions in different kinds of urban environments. Related to community development, Dr Chrisinger is interested in how we might inform and improve place-based policy evaluations and interventions by better understanding the histories of segregation and displacement that may underlie the places we study.

As part of his involvement with the Planners of Color Interest Group in the American Collegiate Schools of Planning, Dr Chrisinger also actively participates in research on the training of urban planners, especially those with backgrounds historically excluded from or under-represented in the profession.