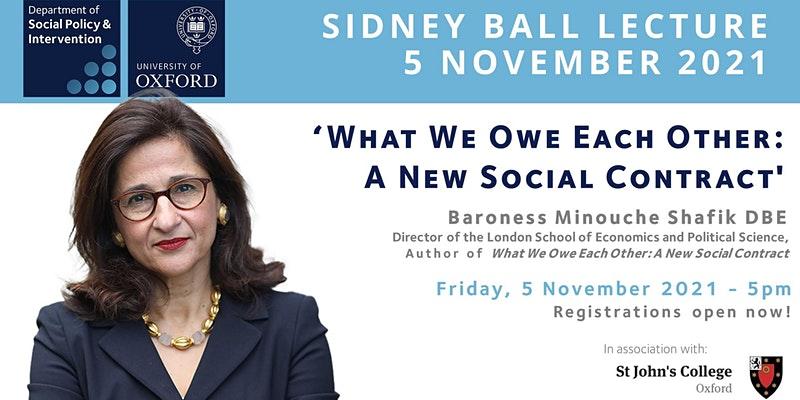 The Department is delighted to announce that Baroness Minouche Shafik will give the 2021 Sidney Ball Memorial lecture in person at St John’s College in Oxford.

She will be talking about her new book, What We Owe Each Other: A New Social Contract, which was longlisted for the 2021 FT/McKinsey Business book of the year award.  In the book she draws on evidence from across the globe to identify key principles for a social contract for every society. She explains how the social contract shapes everything from our political institutions and legal systems to the organisation of family and community and discusses how these social contracts are failing us. She identifies the key principles every society must adopt if it is to meet the challenges of the coming century, with profound implications for gender equality, education, healthcare provision, the role of business and the future of work.

Baroness Nemat (Minouche) Shafik is a leading economist, whose career has straddled public policy and academia. She was appointed Director of the London School of Economics and Political Science in September 2017. At the age of 36 she became the youngest ever Vice President of the World Bank and later became Deputy Governor of the Bank of England. She was made a Dame Commander of the British Empire in the Queen’s Birthday Honours list in 2015 and in July 2020 was made a cross-bench peer in the House of Lords.

The lecture will take place from 5 – 6pm on 5 November in the Auditorium at St John’s College and will be followed by a drinks reception.

Registration is required. Book your free place on Eventbrite.

The lecture will be recorded and released online.