The department was set up in June 1914 as a centre of excellence for the study of contemporary social and economic problems, and the preparation of young people for social work and research.

Originally named Barnett House, the department was established by supporters of the late Anglican clergyman and social reformer Canon Barnett. It would quickly become a pioneer in its burgeoning field of study. However, it would not formally become part of the University for another 30 years.

Take a look at our history timeline to find out more about key dates and events: 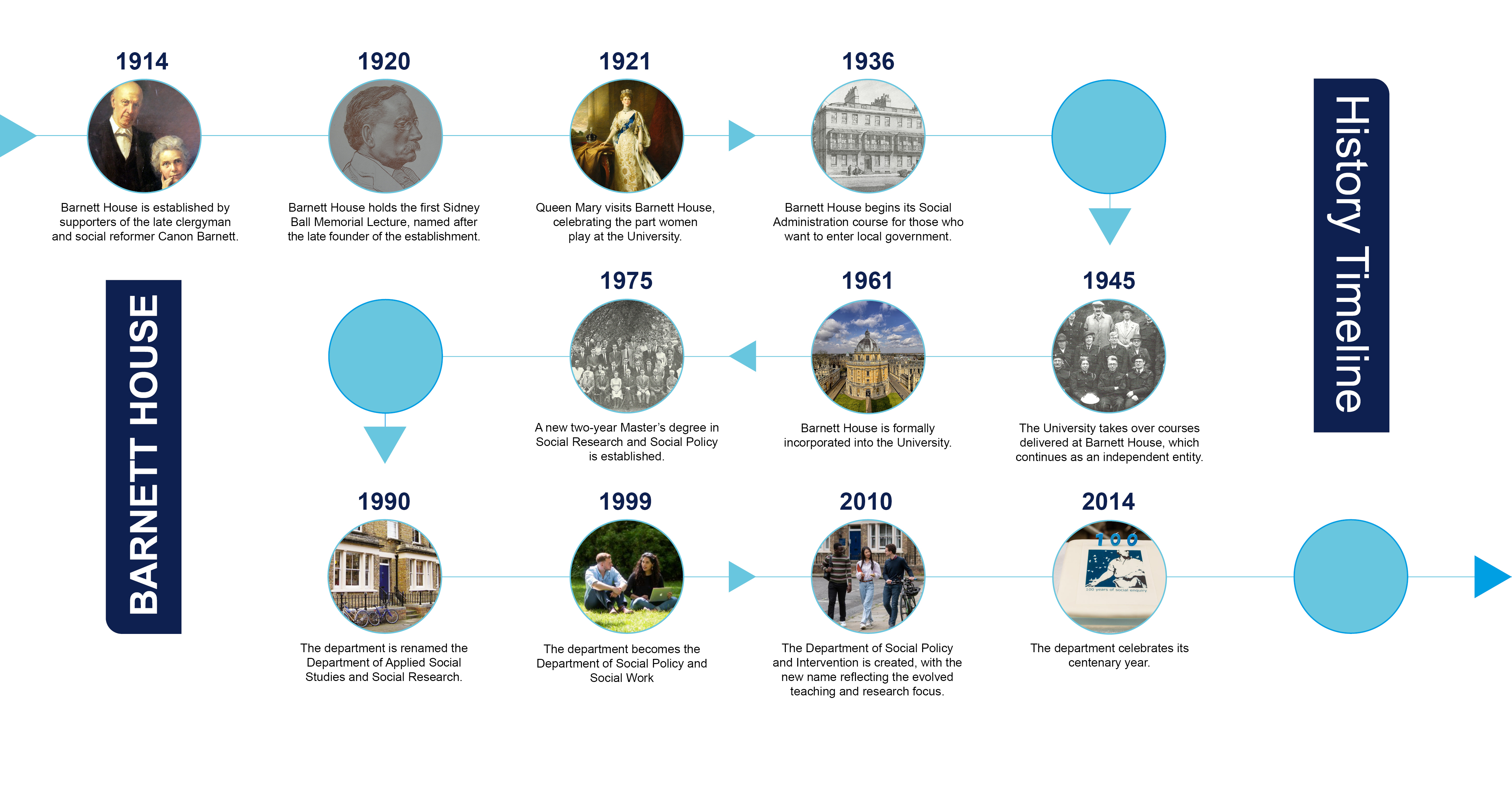 Read more about our history

In 1873 the Barnett family settled in Whitechapel, then a poor area in the East End of London, where they worked unceasingly for the poor of their parish. Barnett kept in close contact with Oxford, where he had studied, and with his cotemporaries, including philosopher and social reformer T. H. Green, Arnold Toynbee and Sidney Ball. They were all closely involved in adult education and university reform, civic education and welfare reform.

When Toynbee died, Barnett proposed that his memory be celebrated through practical action and the founding of a ‘settlement’. A meeting in November 1883, called by Sidney Ball in his rooms at St John’s, laid the foundations for Toynbee Hall in East London, the first university settlement, with Barnett appointed first warden. Barnett's work and Toynbee Hall had an impact beyond Britain, as it became the model for the settlement movement in America, leading to the establishment of Hull House in Chicago in 1889.

When Barnett himself died in 1913, a group of his disciples met in Sidney Ball’s rooms (thirty years to the day after the meeting proposing Toynbee Hall). From here, they went on to set up a new institution in Oxford in his memory. It was a centre combining study, training, adult education and local involvement.

While physically at the heart of the university, with a building on the corner of Turl and Broad Streets, and set up by leading reformers in the university, Barnett House was an independent institution.

It was established ‘to advance the systematic study of current social and economic questions’, to encourage and train people to take up social and caring work, particularly in disadvantaged areas, and to promote adult education. Sidney Ball was first chairman of the Barnett House Committee, and the Department still runs an annual Sidney Ball Memorial Lecture.

In the early years, Barnett House pursued its objectives of research and education by maintaining a library, arranging lectures and conferences, publishing papers, running a variety of training courses and conducting local surveys of social conditions.

The library, supported by the collegiate University, provided access to a range of material and books on contemporary social and economic problems, which, at that time, were not readily available elsewhere. The Social Training course prepared students for the University Diploma in Economic and Political Science and for the Diploma in Public and Social Administration, established in 1936. In the same year, the House was formally recognised by the University as a place of higher study.

After 1946, when the University became responsible for the Social Training course, other activities at Barnett House slackened, and in 1954 the Council decided to end its existence as a corporate body. Today, Barnett House remains the name of the building, and the department continues to pursue its original activities and objectives.

Over the years Barnett House gradually moved into a closer relationship with the University and in 1961 was formally incorporated into it. The eminent sociologist AH Halsey (‘Chelly’) became its director in 1962 (following LJ Barnes who in 1948 succeeded Miss CV Butler, Director since 1919). Around fifty or so students were admitted to the department each year, nearly all graduates, to read for the renamed Diploma in Social and Administrative Studies.

In 1962 there were four teaching members of the Department. Ten years later, this had increased to 14 and by the end of the 1970s additional teaching members had been appointed. Staff included seven University lecturers in social work, one psychologist, eight sociologists, one lecturer in social administration and one in demography.

In 1974 the Diploma in Social and Administrative Studies was replaced by the MSc in Applied Social Studies, a two-year graduate degree combining the old Diploma and professional training. It attracted 25 to 30 candidates each year. In 1976 there were 70 students in the department reading for the Master’s degree. The following year the first students were admitted to read for a newly established two-year Masters degree in Social Research and Social Policy.

Research and teaching continued energetically through the 1980s. A part-time version of the MSc in Applied Social Studies was introduced - the first such degree in Oxford - and senior members extended undergraduate teaching for the sociology, social policy, demography and psychology options in the Philosophy, Politics and Economics (PPE) and Human Sciences degrees. Meanwhile, Oxford received star rating from University Grants Committee in both 1986 and 1989 for research in each of sociology, social policy and social work, an award reflecting the activities within the department.

The 1980s were also a time of retrenchment for the University, however, and the department was weakened by the loss of a number of posts. By 1987 there were only eleven senior members. At the same time, there were ten flourishing research projects with twelve research officers receiving outside funding.

In the new millennium the department once again expanded rapidly. Social Policy teaching developed strongly with the successful graduate degrees in Comparative Social Policy attracting an international entry of about 30 graduate students a year, many of whom went on to doctoral studies. The successful MSc in Applied Social Studies social work training course, which the department ran for many years, was phased out and the final group graduated in Trinity Term 2004. In 2003 a new MSc course in Evidence-Based Social Work was successfully launched with an initial international intake of 20 students.

Research has also expanded steadily since the late 1990s. At any one time there are now 25 or so separate funded research projects underway in the DSPI, with more than 20 research staff and an annual turnover of approximately £1.5m. Funds come from research councils, charitable foundations, local authorities and government departments and, increasingly, from overseas governments or agencies. Since the late 1990s, research in the DSPI has included some major national and international studies that have made a substantial impact on national and local resource allocation, policy formation, policy implementation and evaluation.

In 2014, the department celebrated its centenary. Now, more than a century after its foundation, Barnett House continues to uphold the tradition of providing high quality graduate and research training, closely linked with the importance of social enquiry and social evaluation, driven by a concern for better informed social policy, social intervention and social reform. Our work is now organised into two research centres: Centre for Evidence-Based Intervention and Oxford Institute of Social Policy.