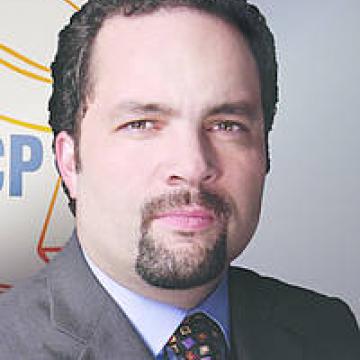 Benjamin Todd Jealous was the 17th President and CEO of the National Association for the Advancement of Colored People (NAACP), the oldest and best known civil rights organisation in the United States. Founded in 1909, the NAACP has played a key role in the civil rights movement for over a century. Appointed at age 35 in 2008, Ben was the youngest person to lead the NAACP.  During his tenure, the association’s online activists and donor numbers swelled, while its membership increased three years in a row for the first time in more than 20 years. Ben stepped down as president in December 2013.

Ben began his career as a community organiser in Harlem in 1991 with the NAACP Legal Defense Fund while working his way through college.  In 1993, after being suspended for organising student protests at Columbia University, he went to work as an investigative reporter for Mississippi's frequently-firebombed Jackson Advocate newspaper. After completing his degree in political science at Columbia University he won a Rhodes scholarship and took the MSc in Comparative Social Research (now the MSc in Comparative Social Policy) at Oxford in 1997-98.

Over past two decades, Ben has helped organise successful campaigns to abolish the death penalty for children, stop Mississippi's governor from turning a public historically black university into a prison, and pass federal legislation against prison rape. His journalistic investigations have been credited with helping spur official investigations into law enforcement corruption, among other achievements.

He is the past president of the Rosenberg Foundation and served as the founding director of Amnesty International's US Human Rights Program. While at Amnesty, he authored the widely-cited report: Threat and Humiliation - Racial Profiling, Domestic Security, and Human Rights in the United States.

As President of the NAACP, he has opened national programs on education, health, and environmental justice. He has also greatly increased the organisation's capacity to work on issues related to the economy and register and mobilise voters. In 2009 he was given the John Jay Award for distinguished professional achievement by Columbia College.