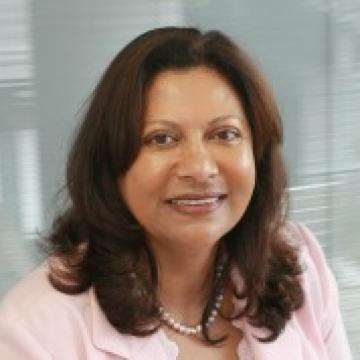 Dr Yvonne Muthien has had the privilege of serving in the first democratic government of South Africa under the late President Nelson Mandela. She was the first woman to be appointed to the Public Service Commission in 1994 in over 90 years. The Commission was tasked with restructuring the apartheid civil service to create an inclusive democratic state. She also served on the Demarcation Commission that delineated the nine provinces (states) for the new South Africa.

Having had a distinguished career in academia, the public service and the corporate sector, Yvonne now devotes much of her time to social responsibility, skills development and capacity building in South Africa.  She currently serves as Board Chairperson for the Sasol Inzalo Foundation and serves on the Thebe Investment Corporation, a company established by Nelson Mandela to assist with Community Building, as well as on the Council of the newly established Sol Plaatje University in Kimberley.

Yvonne completed her DPhil in Social Studies at Oxford University and holds an MA from Northwestern University (USA) as well as a BA (Hons) cum laude from the University of the Western Cape in South Africa. She completed various executive courses in business management at Harvard and Witwatersrand Business Schools. She previously held the position of Associate Professor in Sociology at the University of Natal, South Africa. She is widely published, and has written and edited a number of books, articles and international conference papers. Yvonne was a founding Executive Director of Democracy & Governance at the Human Sciences Research Council. She also worked as a business strategy and scenarios consultant on the Dinokeng Scenarios project, with 35 top South African leaders exploring the possible futures, risks and opportunities that the country faces in the next stage of its fledgling democracy.

In her corporate roles, Yvonne has had a varied career as a Chief/Group Executive in financial services, FMCG and telecommunications. She also has substantial Board Governance experience. She served as Chief Executive: Group Services at Sanlam and Non-Executive Director of Sanlam Investments (Financial Services). Yvonne also previously served as Vice President of Public Affairs & Communications for Coca-Cola Africa based in Windsor, London and as Group Executive Corporate Affairs for the MTN Group Ltd. She formerly served as a Non-Executive Director for Aurecon (Global Engineering), Sentech (Broadcast Signal Distributor), MTN Nigeria (Telecoms), Mossgas (Oil & Gas), the SA Broadcasting Corporation and Transnet (Transportation Logistics). She is currently a Strategic Partner & Business Development Affiliate for Global Engineering Company, Aurecon.